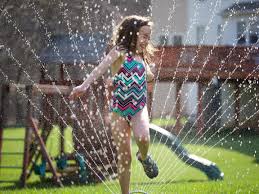 How did our ancestors deal with summer in the days before AC? One of the craziest inventions I’ve seen is a kerosene-powered fan—that turned out to be not such a winner of an idea. Go figure! Soaked burlap sacks hung in front of windows was another trick. Need some trivia for the office water cooler? Check out this fascinating look at the history of AC from author Amanda Green in Popular Mechanics:

Of course here in the high desert, we’re blessed with cool nights so opening every window in the house at night helps hold the heat hounds at bay the next day. This backfired on us once when we also opened the doors to speed up the process. One word. 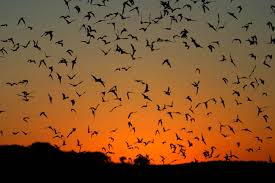 “Did you hear about the bat?” began a recent conversation with my daughter, who was overseas at the time.  Since my grown kids often communicate through FaceBook I’m never sure what family news they’ve already heard.  The conversation proceeded something like this:  “Uh, no— What bat???”   “Our house bat, Silly!“

One summer night we opened all the house doors to cool things down because the air conditioning wasn’t hooked up yet.  About 10 in the evening my college age son and I were sitting on the couch goofing around online.  My husband had gone to bed after working hard out in the field all day.  Observant Son glanced up and exclaimed, “Hey, there’s a bird in the house!”  I took one look and yelped, “No, that’s a bat!”  The airborne rodent flew, really well I might add, all over the house and we could not get it out.  I consider myself a fairly unflappable person but the bat was becoming more frenzied by the minute.

Finally, I sat down with my back against the wall as the bat was doing aerial loops and flybys,   sharing much the same space as me.  My husband must have heard me squeal; he stumbled sleepily out and tried to help us herd it outside.  He stood there with the bat zooming around his head, asking, “Where is it?”  We were laughing too hard to tell him and just kept pointing.  Eventually, we thought we saw it fly out, calmed down and went back to bed.

Not the end of the story.  About four in the morning I heard our cat rummaging around the room.  I got up, shuffled over to the corner and all the noise stopped.  Couldn’t find her in the dark so after growling at her to “Git!” I went back to bed.  This went on about every 15 minutes until five in the morning.

Finally, about 5:30 she began leaping and scrambling around next to my side of the bed.  I grabbed a pillow to fling at her and opened my eyes.  It was not the cat.  The missing bat was flopping around on the floor, its sharp little claws stuck in the rug, confused.  I sat bolt upright and started shouting orders to my husband, who had been sleeping soundly.  The bat managed to disentangle its claws and went airborne causing my husband to duck frantically and me to start laughing. I’m afraid I don’t always laugh at the most appropriate times.

The bat disappeared again and we finally gave up looking for it.  Later that night we returned from dinner out and walked through the house trying to startle it out of hiding by clapping and calling “Here bat, here bat!” Felt ridiculous.  Finally, we just went to bed, exhausted after the disrupted sleep of the night before.    We never saw our houseguest again, I assume he let himself out.

Stay cool out there friends! And turn your funny family memories into some written or recorded stories to tell down the generations. Share this with your friends and inspire them to do the same.