Facing overwhelm and gridlock with your writing project? Unsure which direction you should go or how to get “un-stuck”? If so, working with a coach might be the best positive step you can take. Seeking the help of a professional is an investment in yourself and your goals that can help you reap tremendous progress.

I personally coach authors, memoir writers and families to help them get from where they are—often stuck, with too much information and not enough time, or no idea how to edit their work—and help them get where they want to go.

Together we can line out your goals, set up a realistic and confidence building plan and make great progress. I’ll be your accountability partner, director and cheerleader.

You CAN reach your goals!

If you’re ready to change your story from “If only” and “I wish” to “Look what I did!” “That’s inspiring” and “Wow!” then contact me for a free coaching focus call to help you find clarity. Let’s talk about how working together can take you from “stuck” to “success” this year.

There are a limited number of openings, don’t hesitate to take that step and make a difference. I’ve never heard anyone say they wish they’d waited longer to share their story. Contact me at:

Stop being afraid of what could go wrong

and think of what could go right. 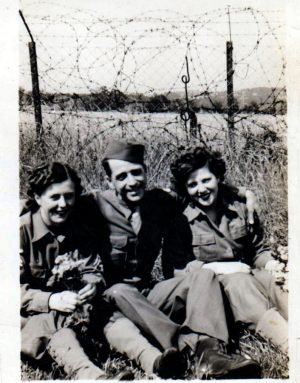 Did you make a resolution to be kinder this year? The many elderly in your sphere of interaction are a great place to start. They’ve seen more than you can imagine and are often eager to share their stories. Next time you’re “stuck” behind someone creeping along with their walker, repeating the same story you’ve heard 50 times, or needing help with basic life skills, the following article will give you pause for thought. This story has been making the rounds and the original author is unknown, but as writer, producer and broadcaster Adrian Vance said when I contacted him for permission to print,

“a great story deserves a life.”

(Vance edited and shared this piece contributed by John Dusek on his blog https://adrianvance.blogspot.com/ June 27, 2017. I received it courtesy of a memoir client and veteran dealing with the health impacts of Agent Orange. Note–the woman on the right in the photo is my own Great Aunt Caroline on the eve of D Day)

CHILDREN OF THE GREATEST GENERATION

Born in the 1930s and early 40s, we exist as a very special age cohort. We are the Silent Generation.

We are the smallest number of children born since the early 1900s. We are the “last ones.”

We are the last generation, climbing out of the depression, who can remember the winds of war and the impact of a world at war which rattled the structure of our daily lives for years.

We are the last to remember ration books for everything from gas to sugar to shoes to stoves.

We saved tin foil and poured fat into tin cans.

We saw cars up on blocks because tires weren’t available.

We can remember milk being delivered to our house early in the morning and placed in the milk box on the porch.

We are the last to see the gold stars in the front windows of our grieving neighbors whose sons died in the War.

We saw the ‘boys’ home from the war, build their little houses.

We are the last generation who spent childhood without television; instead, we imagined what we heard on the radio.

As we all like to brag, with no TV, we spent our childhood “playing outside”.

There was no little league.

There was no city playground for kids.

The lack of television in our early years meant, for most of us, that we had little real understanding of what the world was like.

On Saturday afternoons, the movies, gave us newsreels of the war sandwiched in between westerns and cartoons.

Telephones were one to a house, often shared (party Lines) and hung on the wall.

Computers were called calculators, they only added and were hand cranked; typewriters were driven by pounding fingers, throwing the carriage, and changing the ribbon.

The internet and GOOGLE were words that did not exist.

Newspapers and magazines were written for adults and the news was broadcast on our table radio in the evening by Gabriel Heatter.

We are the last group who had to find out for ourselves.

As we grew up, the country was exploding with growth.

The G.I. Bill gave returning veterans the means to get an education and spurred colleges to grow.

The veterans joined civic clubs and became active in politics.

The radio network expanded from 3 stations to thousands of stations

Our parents were suddenly free from the confines of the depression and the war, and they threw themselves into exploring opportunities they had never imagined.

We weren’t neglected, but we weren’t today’s all-consuming family focus.

They were glad we played by ourselves until the street lights came on.

We entered a world of overflowing plenty and opportunity; a world where we were welcomed.

We enjoyed a luxury; we felt secure in our future.

Polio was still a crippler.

The Korean War was a dark presage in the early 50s and by mid-decade school children were ducking under desks for Air-Raid training.

Castro set up camp in Cuba and Khrushchev came to power.

We are the last generation to experience an interlude when there were no threats to our homeland.

We came of age in the 40s and 50s. The war was over and the cold war, terrorism, global warming, and perpetual economic insecurity had yet to haunt life with unease.

Only our generation can remember both a time of great war, and a time when our world was secure and full of bright promise and plenty We have lived through both.

We grew up at the best possible time, a time when the world was getting better. not worse.

We are the Silent Generation

“The Last Ones”
More than 99% of us are either retired or deceased, and we feel privileged to have “lived in the best of times”!