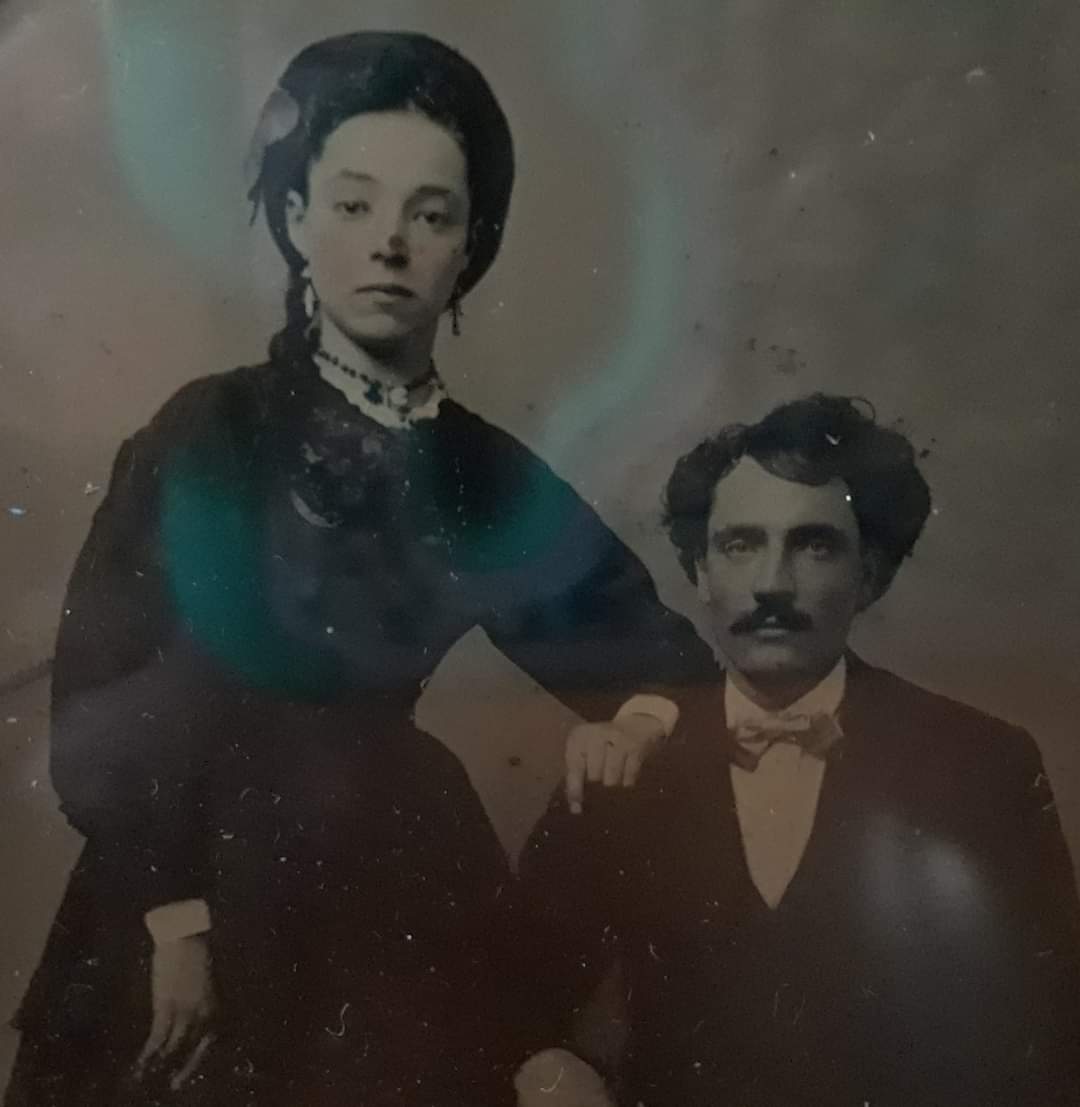 My fellow family historian Patricia D’Ascoli is stepping in to share her own family history mystery. She is a skilled writer and researcher and I’m delighted to share her work with you. She’s also an active member of the Family History and Memoir Writer’s Fellowship FaceBook group. Her story is a fascinating read and we hope it will prompt you to write about the stories in your own family. Patricia can be reached at Patriciafdascoli@gmail.com and welcomes talking with you about bringing your family history to life.

Every family historian comes across the unknown—a gap to be filled, a missing puzzle piece to be found. This is the story of my journey to uncover the truth about the disappearance of my paternal great grandfather, Moses Jordan. I had very little to go on when I began my search:

Lore: My grandmother Margaret told my father this brief tale: One day when she and her mother Sarah were walking in the park, they saw Moses with another woman.

At some point following this sighting, Moses vanished and never returned.

There was no date, no place or any other names attached to this story. Despite this limited information, I felt confident I could solve the mystery.

Before I began my search, I examined a tiny photograph of Moses and Sarah. Neither of my great grandparents is smiling. Moses is sitting, and Sarah is standing behind him with her left hand placed on his shoulder. Moses, who has dark wavy hair and a mustache, wears a suit with a bow tie. Sarah wears a high neck gown; her hair is up.

Researchers must have a desire to dig deep and think critically. Although I had little to go on, the search was not as difficult as I imagined it might be. Through Ancestry.com and Newspapers.com I was able to solve the mystery of my great grandfather’s disappearance. And in doing so, I uncovered a dirty secret: Moses Jordan was a thief, an adulterer and a liar. He was also very, very fat.

I started with the 1875 New York census where I discovered the family in Port Jervis, New York. Moses worked as assistant yardmaster for the Erie Railroad. Research revealed that in 1880 Moses was appointed assistant dispatcher at Bergen, New Jersey. The 1880 US census confirmed that the family lived in Jersey City. City directories showed they continued to live in Jersey City until 1890.

I wondered whether there might be a newspaper account of this event. Once upon a time, newspapers were replete with the intimate details of ordinary individuals’ lives so there was a good chance such a story would appear in the papers.

Two newspapers reported on the disappearance in November 1890. These articles gave me all I needed to know about my great grandfather. He was a scoundrel of the worst kind.

“Moses Jordan, the yardmaster of the Erie Railroad, has eloped. On November 11, payday, he borrowed all the money he could get from storekeepers along Pavonia Avenue, and after ordering his trunk to be shipped from his residence, 283 Pavonia Avenue, to 106 River Street, Hoboken, he skipped. About the same time, it is rumored a well-known woman disappeared from the city. While the elopement was being planned and carried out, Mrs. Jordan was at Wurtsboro, New York, attending the funeral of her father. The runaway leaves her and a nineteen-year-old daughter and ten-year-old crippled son behind him.” Jersey Journal 11/20/90.

“Jordan has been practically separated from his wife for some time past, owing to the latter’s suspicions of his intrigue with another woman. Who she was could not be learned except that she was a married woman who was not living with her husband. The deserted wife declined to give her rival’s name or impart any particulars concerning her.” Tri-States Union 11/27/90.

Sarah’s departure for her father’s funeral was a fortuitous occurrence for Moses, as he and the mystery woman were able to leave Jersey City without her knowledge. I imagined my great grandmother grieving her father’s death in New York, returning home with her two children only to discover that Moses had left. She was then questioned by the police. And saw her shame laid bare in the newspapers.

I was determined to find out the identity of the woman who had destroyed three lives. A little more searching gave me the answer. On June 6, 1891, the New York Tribune published this short piece:

“Master of Chancery Romaine made a report in favor of granting a divorce to Sarah D. Jordan from Moses S. Jordan. Jordan was yardmaster for the Erie Railroad in Jersey City. He eloped November last with Mrs. Elizabeth Rowe, a married woman.”

Bingo. The identity of the mystery woman was revealed: Elizabeth Rowe—the woman who stole my great grandfather away from his wife and children. I wanted to know more about her. A search revealed that Moses Jordan married Elizabeth Roe on January 13, 1904 in Manhattan. They were married 14 years after their disappearance. Hmmm. Where had Moses and Elizabeth lived between 1890 and 1904?

I decided to look for Mr. Roe. In the 1885 New Jersey census I found Lewis C. Roue living in Jersey City. Also living at that address were Jeremiah, Ella and Lizzie Hulick. Lizzie is a nickname for Elizabeth—was this Lizzie the future Mrs. Roe? A marriage record for Lewis Roe and Annie E. Hulick dated July 29, 1886, confirmed that she was. I assumed Elizabeth must have been her middle name. Further sleuthing showed that Mr. and Mrs. Lewis Roe had a daughter Sarah born August 25, 1887.

My search continued. In the 1900 U.S. census I found Moses Jordan, who stilled worked for the railroad, living in Susquehanna, PA. The scandal had not impacted his career apparently. His wife—of 10 years per the census—was Anne E. Jordan. I felt certain this was Annie E. Hulick Roe, as subsequent censuses showed her as Elizabeth Jordan. In 1900 the Jordans had three children: Harry (b. 1891 NY), Mae (b. 1893 PA) and Harold (b.1896 PA). Sarah Roe lived with the Jordans as well.

The story might have ended here. Like every family history sleuth, however, I knew there was more information to be found. From a brief newspaper account, I learned Moses had suffered a serious injury. The headline read:

“Mishap Due to Too Much Fat. Stout Yardmaster was Rolled Along Fence by Train and Perhaps Mortally Hurt.”

“Moses Jordan, who for many years was yardmaster on the Erie at Bergen, New Jersey, then at Hornellsville, and of late in charge of the yards at Dundee, where the branch lines to the Passaic Mills are located, was probably mortally injured yesterday. His extreme corpulency was responsible for his misfortune. Seeing a freight train approaching Jordan stepped off the tracks and backed up against a board fence. But the three cars brushed against the stout yardmaster and rolled him along the fence nearly thirty feet. His shoulder was broken, and it is feared he is hurt internally.” The Morning Call 8/29/02.

My first thought was that Moses got his just desserts. But I hated to think my great grandfather died as the result of such a brutal accident. I learned in subsequent accounts that Moses survived. The Jordans moved back to Jersey City where he continued to work for the Erie Railroad.

A death notice appeared in the Jersey Journal:

“JORDAN – On February 3, 1927 Moses S. Jordan, widower of the late Elizabeth Jordan. Relatives and friends are invited to attend funeral service at establishment of Mark M. Fagan at 527 Jersey Avenue on Sunday, February 6 at 1:00 PM.”

I do not know where my great grandfather is buried. But I do know that his secret is not buried with him. Thanks to my research, I was able to solve the mystery of Moses Jordan.

Have a story of your own to share? I’d love to hear from you, you can reach me at karen@rememberingthetime.net.