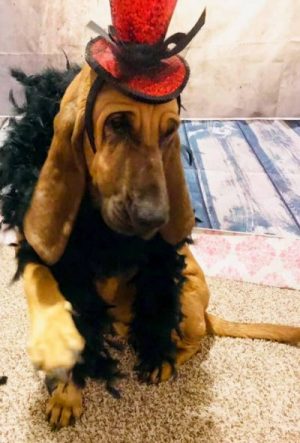 Guest Blog by Nicole Garcia, a Pediatric Nurse Practitioner who runs, in what little spare time she has, a growing photography business (NicsPics). (Note: PNP and NicsPics professional contact is Nicole Oswalt.) She’s a wife, a dog mom to three dinosaurs, er, dogs, and considers herself some sort of crazy bad luck magnet. She says, “If something is going to happen or go wrong, it will happen and/or fall apart to/with me; though thankfully the trend seems to be in hilarious (to others) and truly baffling ways versus true tragedies!” As you think about all the ways your pets play a role in your family and consider sharing their stories, welcome to Nicole’s world.

On the Frontlines with Layla, Canine Drama Queen – PART 1

My dogs, though they are oh-so-very-loved and spoiled rotten to the core, are the source of many of my disaster stories. This is one of those tales. Sit back, relax, grab a cup of whatever your poison is at the moment, and enjoy a laugh or ten thousand at my expense.

My dear husband (fiancé at that time) had been talking about getting a dog for a bit, which really meant I was begging and pleading to get all the puppies I saw, and yesterday couldn’t have been soon enough. I have the patience of a four year old on pixie sticks and the stubbornness and persistence of an ancient mule, so needless to say, the decision was made to get a puppy!

Layla, a soon-to-be five-year-old pure bred bloodhound, was a wedding present from great friends of ours. As the runt of the litter she hadn’t found a forever home by nine months old and was a surprise to us. That should have been a sign from the universe, a warning that she might not be the sweet, adorable thing she appeared to be. We were smitten with this creature made up of feet, skin, and allllllllll the ears. What an amazing adventure life with her would surely be.

We figured out with lightening speed that all of our plans for training our new addition; taking her places and doing all the right things were going up in flames faster than an explosion at an oxygen tank factory! Our Layla had the body of a bloodhound, temperament of the ultimate mamma, intellect of a post, attitude of a thousand toddlers, personality of Cybil, and the willingness to obey or listen of the wind.

In Layla’s world, danger has many forms. Vacuum is her most hated foe, followed very closely by Bath. Blowing leaves, odd noises, a plastic bag that is too near to her bubble, her little brother’s flatulence; all just a few of the many forms of danger that Layla endures regularly. She is the sweetest dog imaginable; if any small human is within a one thousand mile radius, she howls and whines until she can mamma them until they want to throw themselves off a cliff! She does NOT tolerate allowing small humans to cry and gets incredibly upset if she sees them doing anything remotely dangerous, whining and speeding to the nearest larger human to alert them of this danger so that it may be addressed.

However, where her small humans are concerned, danger lurks everywhere; on the sidewalk, on the trampoline, and especially within twenty feet of any stairs. Diaper changes, sitting down unaccompanied, standing unsupervised, eating anything, all first require her  quality control efforts to ensure that diapers won’t attack and food isn’t poisoned. Oddly though, she knows no strangers and would happily greet an intruder wielding a bloody machete with a nuzzle, pawing at them for scratches as she dutifully shows them all the good stuff.

Take a moment some time, to peruse Amazon for all of the doggie behavioral tools, sprays, deterrents, leashes, collars, books, etc. There are some amazing inventions to help combat the gamut of issues you may encounter with your fur baby. Trust me, I’ve tried them all! None of them have been bloodhound tested……I assure you……not a single one. Layla does what she wants, when she wants, and though we try our best not to let this happen, she usually finds a way. When she is caught, she looks you dead in the eye with her tongue lolling out of her mouth and her fat alligator tail wagging, and then walks over so that you may pet her. No remorse. No shame. Is there a fresh hole in the yard wide and deep enough that you’re convinced lava will come pouring out any second? Layla. Come home to find the trash, a favorite of that bloodhound nose and terrorist urges, scattered everywhere throughout the house because you dared leave her for over fifteen minutes while it was dark outside? Layla. And I bet you even money, she will be found, still chewing on or eating a treasure from her trash diving mission, with her tail thumping against the floor as you search the house to find her. Then as you’re cleaning up her mess, she will follow you, happily wagging her tail and bumping her head against you to demand cuddles since you’re already on the ground.

Missing dirty socks or underpants? What about a favorite make up sponge or key chain with something fluffy or soft on it? Layla. The fluffy will be torn to microscopic shreds. Undergarments and makeup sponges will usually be found cradled gently in her mouth as she goes to “hide” in her kennel or on her cushion. Or guarded between her two giant front paws as she snores peacefully.

When you retrieve the object, she looks at you as if you had truly murdered a child in front of her, but doesn’t growl or nip. If looks could kill, we would all have long ago left this world. She will then, with a mighty and dramatic hrrrrrrrmph, lift her bulk from its resting state of shapeless flesh, and waddle in the sassiest of ways to the nearest human she can find, to tattle on the offending individual.

Many people assume that I, like so many other crazy dog people, exaggerate the traits and behaviors of my beloved naughty terror. That I assign to her human actions, emotions, or motivation, but that she is truly nothing more than a spoiled fur baby who exists as any other dog does. I understand these assumptions; I don’t fault people for them. After all, no one could really be expected to believe this dog is as ridiculous as described, or that she does things like tattle, pout, throw tantrums, give dirty looks, or dole out a cold shoulder when she’s been scolded. Yet, these things do happen

A flair for the dramatic is also something Layla could teach lessons on to even the most skilled of classically trained actors. She is dramatic in all ways, at all times, and in the worst possible moments; but all her naughty powers of drama and tantrum are on full display when she’s wearing a special collar her trainer recommended  that’s helping her learn not to pull and there are other animals around.

The collar did MIRACLES for the pulling/yanking/dragging problem, and quickly Layla learned to walk nicely on her leash, comfortable and sassy, while we were no longer in danger of paying for an Orthopedic Surgeon’s yacht with the shoulder replacements we would surely need after much longer. But……Layla is not to be thwarted. She has no manners when it comes to other animals. She’s not aggressive at all, she just goes from useless lump of sleepy stubborn dog (her normal state), to yelping, crying, howling desperately, jumping, flailing, alligator rolling on the ground, shrieking, and lunging toward the unsuspecting creature in her dramatic attempt to say “hello” and play!

After almost five years of this struggle, she now agrees to sit much more quickly, but FAR from more quietly! Layla wails and howls, whines, throws herself on the ground in attempts to melt into the floor and gain the ability to ooze herself sneakily toward the new creature. In short, she throws a full-on drama queen toddler tantrum at the top her lungs. Nothing quiets this display. It can be heard from space! The Naughty One knows how heartless and cruel her evil owners appear in these moments. She can sense the def-con 56 level of mortification her girl human is experiencing and the fact that her boy human lost the will to live in the first twenty seconds of the fit. She LIVES for this! And it always works. Inevitably, crowds will surround her, full of coos and baby talk, they will coddle and cuddle, pet and scratch, all while assuring her that she’s not doing anything wrong and she’s just guilty of “wanting to make friends”. Another inevitable truth is that in the midst of the throng, will sit the sassiest most self-satisfied dog to ever walk the Earth, soaking up all the affection and sympathy. She will turn to look her humans in the eye with a gloating smile and the thumping of that alligator tail. Game, set, match. Layla emerges victorious yet again.

This background is necessary so that you can understand the following story… (to be continued) Thanks for hanging with me this long!